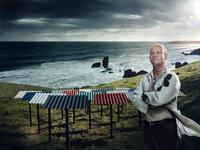 RAIN HAIL OR SHINE. COLORBOND STEEL IS OUR FIRST CHOICE FOR YOUR ROOF

It is now widely accepted that changes to the environment due to human activities, such as deforestation, industrialisation and urbanisation, have in turn affected many aspects of local, regional and global climate.

In a report to the Australian Federal Government, BRANZ Pty Ltd noted the importance of planning for these unavoidable, and in some cases, unpredictable events across the built environment.

Steel products can be used in new construction and retrofit projects to help mitigate these expected changes.

Average temperature is expected to increase in most locations, including more frequent heatwaves, such as those experienced across south-eastern Australia in January and February 2009, where the maximum temperature in Melbourne was above 43°C on three successive days for the first time in recorded history.

Patterns of rainfall are set to change across Australia. A range of seasonal and regional differences are expected, which collectively mean that most of the top half and centre may be prone to more flood events, while the southern states may be more prone to rainfall deficits and droughts.

When it does rain, the intensity of rainfall events is expected to increase in most locations across Australia, which means that floods are more likely. Coupled with sea level rise, coastal regions may also become increasingly prone to inundation during storm events.

High strength steel framing is less likely to be overwhelmed by floodwaters than some other materials that can be used for the same purpose. Steel structures have been found to require less maintenance post-flood.

Cyclone frequency is likely decreasing, while the occurrence of severe storms is likely increasing. Most importantly, the intensity of the storms when they do form is likely to increase. This means that designing and building resilient buildings will become even more important.

The strength and durability of steel makes it a sensible choice for structural building components, while its malleability means that curved lines which reduce wind loading can be easily formed.

Higher temperatures and lower humidity and rainfall are likely to mean that bushfire conditions will occur more frequently.  It is also predicted that when fires occur, they will be more intense.

Independent testing has found steel products to be more resistant to fire than other materials used for the same purpose.

Hail storms are likely to increase across the Sydney basin, but may decrease in Australia’s south-east. The Sydney hailstorm in April 1999 is still classified as one of the most expensive natural disasters in Australian history, costing the equivalent of US$1.7 billion at the time.

Anecdotal evidence and independent testing have shown that steel roofing is less likely to be penetrated than other roofing materials.

This blog post has been sourced directly from the Bluescope Steel Sustainability Website. We have published the article without making any change to the original piece.

Speak to us about your next project

Our team will get your questions answered as soon as possible.

Speak to us about your next project

Our team will get your questions answered as soon as possible.

Why do Brad Anderson’s customers (almost) always refer him to their friends?

Well, although he doesn’t like to crow about it, as a roof contractor – he’s a craftsman

We’re Melbourne’s best metal roofing specialist, so if you want to work with the best (and the friendliest), feel free to drop us a line by phone, or fill out our contact form to send us an email.

We’d love to talk to you.